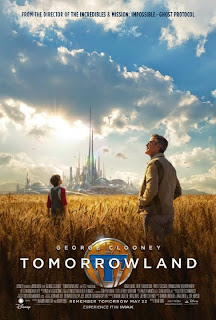 Bound by a shared destiny, a teen bursting with scientific curiosity and a former boy-genius inventor embark on a mission to unearth the secrets of a place somewhere in time and space that exists in their collective memory.

"Tomorrowland" is definitely a movie for Disney fans, particularly those who have been to the parks. Anyone who has visited the theme parks might remember an area of the park called Tomorrowland. Innovation, utopia, and the future were important Walt Disney himself, and influenced many ideas in this area of the parks. Those ideas also are what the Tomorrowland in the movie is all about. 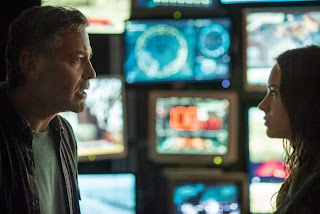 The movie opens with Frank Walker (George Clooney) recording a video with Casey Newton (Britt Robertson) giving him plenty of off camera remarks. Basically, the two end up telling their own personal stories of how they discover Tomorrowland, and came to be friends. Frank's adventure started, as a young boy, when he built a rocket pack, and took it to the 1964 World's Fair. Frank is an inventor at heart, and ends up playing a key role in the development of Tomorrowland before leaving. Casey is more of the curious teen who is extremely motivated to get what she wants. Her adventure starts in the present day, and ends up playing an important role in trying to save Tomorrowland. 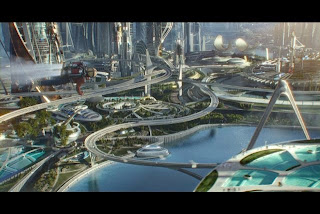 The real fun in the movie starts when Frank and Casey meet each other for the first time. Frank wants nothing to do with her, but she's motivated to find out what he knows about Tomorrowland. In one of the better scenes, some robots at Franks home attack the two of them. As mentioned, Frank's an inventor, and his house has plenty of inventive ways of getting rid of the robots. With the help of Athena (Raffey Cassidy), the young girl who introduced both of them to Tomorrowland, Frank and Casey make it back to Tomorrowland to try to save it. Saving Tomorrowland isn't an easy task, and it's made even harder with Nix (Hugh Lauri) trying to stop them. 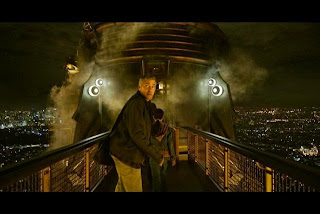 It’s a good story, particularly the way they put it together. While much of the movie is in the present day, they add in key parts of Frank as a young boy to give important back-story. They also do a terrific job of creating a Tomorrowland that not only the characters want saved, but so should the audience. As expected, Clooney gives a good performance. Lauri proves to be a good choice as a bad guy, who isn't necessarily truly evil. The surprise performance goes to Robertson, who is a lot more convincing in this role than her role in 'Under the Dome.' 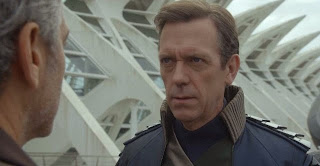 While "Tomorrowland" might not be an instant classic, it's a movie that Walt Disney probably would have been proud of. They do good job of displaying his vision of a Tomorrowland full of innovention, and as close to an utopian life as possible. They put together a good story, create interesting characters, and get quality acting. If anything, it's a movie that Disney fans like myself can relate to. Being familiar with the theme parks, they had me with the early on with references to rides like 'The Carrousel of Progress,' 'Space Mountain,' and the very Disney like pins. With that said, I give this movie 3 stars!