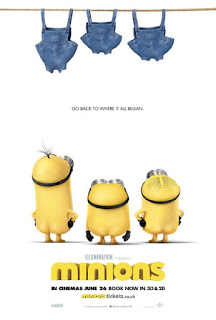 Minions Stuart, Kevin and Bob are recruited by Scarlet Overkill, a super-villain who, alongside her inventor husband Herb, hatches a plot to take over the world.

Animated movies create many characters that both adults and kids can love. Sometimes it's as simple as loving the main character. Then there are movies that create minor characters that can't be ignored.  While "Despicable Me" is about Gru, and the kids, audiences can't ignore the attention the minions command. They have become so popular that now they have their own movie, "Minions." The big question is can the minions successful move from being minor characters to being the stars? 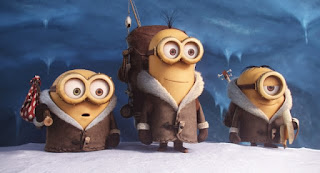 The movie starts by showing how the minions came to be going all the way back to the beginning of time. It's a pretty hilarious start, as the audience gets to see them with dinosaurs, in ancient Egypt, and more. The audience also finds out what the ultimate goal of the minions is...to serve the most evil boss on the planet. Being that the minions continuously fail their evil boss, they retreat to a cave to regroup until Kevin decides to search for a new boss.

This is where it becomes make it or break it time for "Minions." The focus of the story shifts squarely to Kevin, Bob, and Stuart. There are brief visits back to the rest of the minions, but it's mostly the three of them until the final scene. The trio each brings something a little different to the table. Kevin is the smart one, if there can really be a smart minion. Bob is just plain silly, and acts like a little kid. Stuart is almost somewhere in between. He tries to out do Kevin, and can be equally as foolish as Bob. 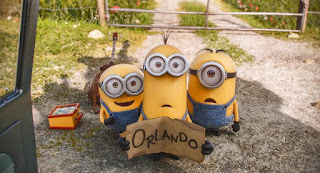 The three of them go on a fun adventure to find the most evil boss they can find. This is where the movie struggles just a little. Yes, there are many fun moments of the trio trying to find their way. However, there are also some brief moments where it almost feels like the movie slows down. It could be just a matter of the minions not really being able to talk. With regular characters there would be some dialogue to help carry the audience through these kinds of moments. 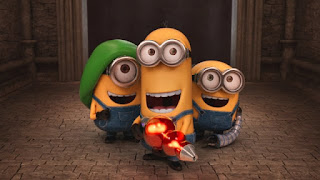 Of course they eventually find that boss, Scarlet Overkill (Sandra Bullock), and she’s plenty evil. After this happens, the movie picks back up with laughs, and dialogue courtesy of Scarlet, and her husband. While she thinks she has found the perfect henchman to carry out her evil plan, she obviously has never met the minions before. The plan goes wrong for her, but not Bob. Bob becomes King Bob in one of the best scenes. A great scene of the three minions getting tortured also soon follows that. 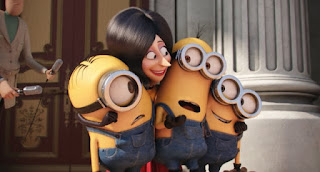 For any slowness, it certainly ends in a gigantically fun way. While trying to be bad, the minions actually do some good in trying to save themselves, and England. It's funny when the minions don't really know what they are doing or why, but things just kind of end up the way it should be. Besides being fun, the ending has somewhat of a surprise for fans. It pretty much completes the movie.

Overall, audiences should expect the usual craziness, and more from the minions. Yes, it slows at a few points mostly cause of the lack of dialogue, but it will certainly have fans laughing out loud. Audiences will also get to know a little more about the minions, where they came, and their purpose. The minions do just enough to prove they can be stars of their own movie, so I give “Minions” 4 stars!