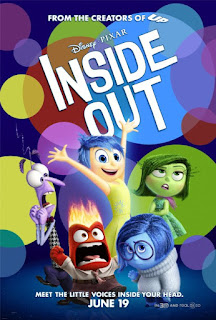 After young Riley is uprooted from her Midwest life and moved to San Francisco, her emotions - Joy, Fear, Anger, Disgust and Sadness - conflict on how best to navigate a new city, house and school.

"Inside Out" brings emotions to life in more ways than one. First and foremost, there’s actually a cast of emotions living inside the head of a young girl named Riley (Kaitlyn Dias). A similar cast of emotions lives in each person and creature that appears, but more on that shortly. Joy (Amy Poehler), Fear (Bill Hader), Anger (Lewis Black), Disgust (Mindy Kaling), and Sadness (Phyllis Smith) are the emotions that shape her life from the moment she's born.  While most of the emotions get a chance to control her when she's a baby, the older she gets the more Joy tries to control her life. The other emotions seem all right with this, and only step in when there's a clear need for their emotion to be shown. 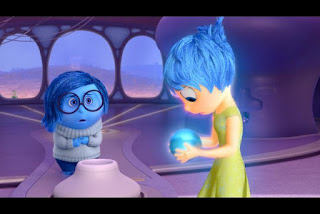 That's until Sadness starts touching things she shouldn't, which starts changing Riley's memories, and emotions. Sadness couldn't have picked a worse time to cause trouble because Riley is dealing with the struggle of moving to a new city. Joy tries her best to keep Sadness out of the way, but in the process, both get sent out of headquarters, and into other parts of her mind. Joy and Sadness then embark on a crazy adventure to get back to headquarters before the emotions that are left at headquarters set Riley on a path that won't be easy to recover from. 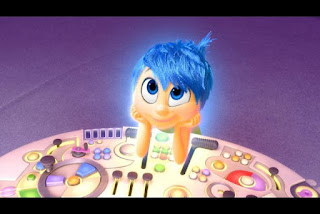 It's no coincidence that Joy and Sadness are the two emotions that the story focuses the most on. They are also the emotions that will be hitting the audience the hardest. Joy is the closest thing to laughter, and there's plenty to laugh at. There are hilarious moments when each emotion gets to control Riley as a baby. Everyone knows about the extreme emotionally swings a baby can have, and they hit on a bunch of them. There are also the moments when the emotions fight to figure out which emotion Riley should have at certain times. And that's not even counting all of the insane things that take place on Joy and Sadness's adventure.

Then there is the opposite of Joy... Sadness. In one of the T.V. spots for the movie, it mentions that this is the best Pixar movie since "Up." Well, for those that remember "Up," it's a terrific movie filled with hilarious moments, but there's also some sadness in the story. Apparently Pixar is not afraid to add a little dose of reality to a kid's movie. Just like "Up," sadness will certainly hit some of the audience. The audience will feel sadness for Riley as her life changes, but sadness will come crashing down on some when something even more traumatic happens. 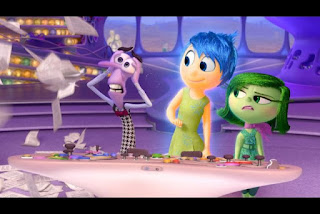 Enough with the depressing talk. The writers need to be complimented on putting together one hell of a creative story. There’s so much more than just the emotions running around in her head. There's a whole structure to how her memories are stored, and how they can change if the emotions aren't careful. Core memories are what really drive her, but they can also be changed. Joy and Sadness venture through all kinds of crazy places in her head, and run into some interesting characters that aren't emotions. All of that is amazing, and that's not even mentioning all of the comedy that's produced. 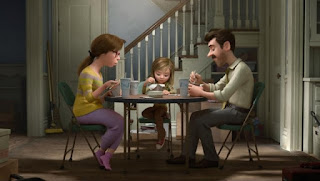 As mentioned in the beginning, there's a cast of emotions in each person, and creature. Some of the most hilarious moments are created when the audience gets to see these emotions, and how they basically react to the cast of emotions in another person. In particular, there are a couple of moments when the audience gets to see the emotions in the heads of Riley's parents. Many of the parents in the audience will laugh because they will be able to relate to exactly what's going on in their heads. While the focus of the movie is understandably on Riley's emotions, the only complaint is that it should have had more moments in other characters heads simply because it’s so entertaining! 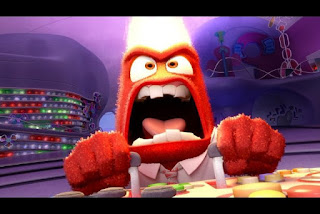 What else is there to say other than Disney-Pixar hits it out of the park again? “Inside Out” is an emotional movie about how actual emotions shape a young girl’s life. Joy and Sadness are opposite emotions, but have to figure out a way to coexist while on a great adventure inside her mind. The movie will have audiences dying of laughter, but just like Riley, they might experience some sadness. The writers really use their imaginations to put this story together. With that said, I give this movie 5 stars!