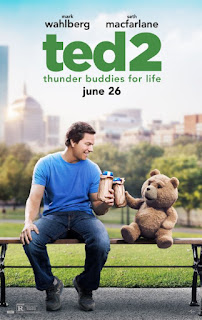 Newlywed couple Ted and Tami-Lynn want to have a baby, but in order to qualify to be a parent, Ted will have to prove he's a person in a court of law.

Boy has the world changed. There used to be a time when bears were nice, and friendly. There were the Care Bears, who were lovable multicolored bears with things like hearts and rainbows on their stomachs. Then there was Teddy Ruxpin, a bear that could actually talk to kids. Put them together, and you definitely don't get Ted (Seth MacFarlane). He might come from a line of cute bears, but he's certainly not for kids!

Because of this, Ted took audiences by surprise with his vulgar language, and outrageous behavior in "Ted." Audiences can expect much of the same from Ted in "Ted 2," but with a few minor changes. The first change is that this movie is a lot more from Ted's perspective. John (Mark Wahlberg) character takes more of a back seat to Ted. This time around, the focus is on Ted's marriage, and his fight to be recognized as a person and not property. This slight change makes this comedy about as interesting as it can be as far as story lines are concerned.

Of course there's still plenty of hilarious moments between the two. There's a crazy scene in a sperm bank. Yes, just imagine what they have in store for audiences there! The two also spend plenty of time smoking weed together, which again is insane to see Ted doing. They also hatch a few not so brilliant plans that only the two of them would think of, and try to pull off.

One of those plans involves Tom Brady, who is one of several celebrities that make an appearance. Ted and John just come up with the most ridiculous scheme to try and steal something from him. Tom does all right because all he really has to do is yell at the two. Morgan Freeman also plays the role of a lawyer who might be able to help Ted out. While brief, audiences get the typical great performance from Morgan. There are also a few surprise cameos, which are fabulous and will remain a secret.

Another obvious change this time is how Amanda Seyfried is inserted into the story, and Mila Kunis exits stage left. John is now divorced from Kunis's character, so there's an open spot for a woman by his side. Amanda plays a young lawyer named Samantha, who is tasked with defending Ted's rights in court. Amanda does a good job, as she jumps right in, and does plenty of her own crazy things.

One thing that might go unnoticed by some is how they try to dress Ted up some more this time. He's dressed when he goes to work, and in court. When he's just hanging out with John, he's usually naked. The best is when he's in full scuba gear. Speaking of dressing up, it almost seems perfect for one of the major scenes towards the end to take place in New York's Comic Con. Besides Ted fitting right in, there's an awesome fight scene with people in different costumes. 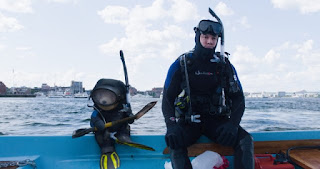 Overall, if audience enjoyed the crude behavior of Ted the first time around, there's no reason to believe they won't enjoy another round of it. There are a few minor changes such as, shifting the focus to Ted, adding more celebrity cameos, and inserting Amanda Seyfried. None of those things take away from the hilarious moments Ted and John create. Just like “Ted”, “Ted 2” is certainly for adult audiences, so leave the kids at home with their Care Bears! I give it 3.5 stars.